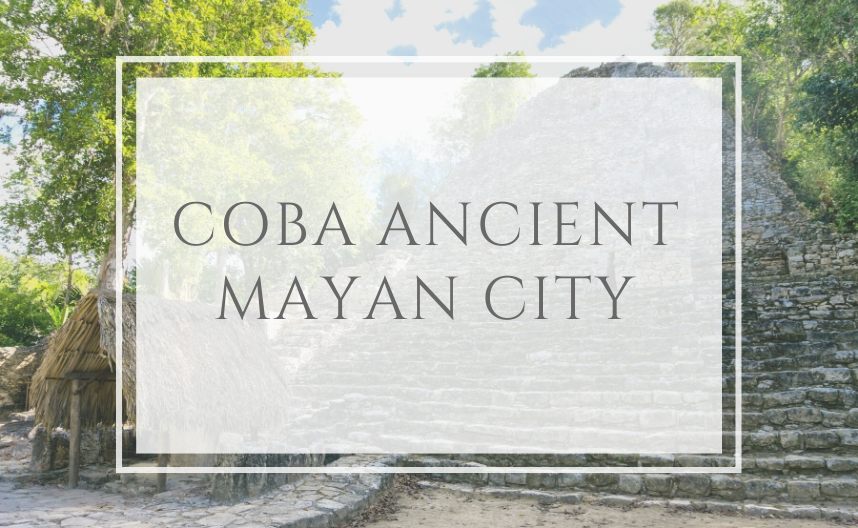 Coba the Ancient City of the Mayans.

Coba translates as ‘waters stirred by the wind’, appropriately named as it is surrounded by two encapsulating large lagoons.

The City emanates pristine energy; the merging of the Jungle (vines, trees, and flowers) with the largest network of stone causeways in the ancient Mayan world and 50 sacbes (white roads – only 16 open to the public).

With the graceful immersion into the Ruins, greatly assisted by the use of bicycles (it’s a big city), beloved Asherah and I began to attune to the Feminine Energy of the city.

Most notably for us, at the top of the largest pyramid at Coba “Ixmoja” (120 Steps to the top), there is a temple, with Feminine inscriptions.

After arriving at the top of the Pyramid, Asherah and I began to tune into the energies of the large pyramid.

Energetically what we could sense was the same technology of many other civilizations, as the Pyramid structure was sophistically woven with knowledge of the Fibonacci Spiral (and other organic equations of Nature), which organised the energy to move in an uprising vortex-like structure.

It was like, the temple was utilized as an energetic projection or transmission point, strategically located in the middle of the ruins.

Looking out from the top of the “Ixmoja”, you can see the majestic city covered by the thriving Jungle.

It felt as if, energetically, that from the Pyramid with shared intention and trained Mysticism (Mayan Womb Shamans), utilizing the vortex energy accumulation of the Pyramid, a group of beings had the potential to energetically influence the whole city.

I was shown a vision, of how the Pyramid was perfectly built at that specific height, as the energy projects to the corners of the site in a toridial like particle arrangement. Almost like an energetic force field around the site, influencing the particles within.

The Womb Shamans would utilise this energetic projection point, to upkeep the energy of the city, in alignment to the womb (micro) and celestial cycles (macro) (another large topic for discussion) – essentially creating a potent field of energy in alignment with nature, thus manifesting as harmony and synergy amongst the thriving population (estimated 50,000 people at its peak).

Currently, I am reawakening to the Womb Mysticism, a lost sacred science that had been known to ancestors past. Hence, why this sacred site was devoted to the sacred feminine. The alchemy of the womb, in which life is created from the void, is a macrocosmic reflection, of life itself. And all are fractals – every unique life containing the blueprint of the whole…arising from the Womb of Creation (void of pure potentiality) and returning too…

One could almost say the Pyramid is the womb, the void where the primordial energy is cultivated, that then is projected out into creation, which is life…

We then at some point, continued to embrace the energies of the Pyramid in a deeper meditative state.

As we tuned in deeper, there was a distortion in the temple’s energetic field.

Asherah was connected to a Quantum timeline of a affluent masculine energy that was involved in the fall of the Coba consciousness field.

This masculine energy, was involved in a tragedy with a lover – which truly was an unresolved / unconscious issue with the Mother, which then manifested as patriarchial energy in response to the sacred Feminine embrace instilled in Coba.

You know how the story goes from here, once the patriarchy is on a vendetta to control what is truly uncontrollable, this distorted masculine energy which acts for the individual (competition) instead of the whole, because of its inability to drop into vulnerability and process the emotions behind the wound in which it is acting upon…

and thus why we must learn to surrender to the pure potentiality of the womb…as it is a non-dual phenomenon, it is always in unity with the whole, as it is the womb in which all

So that specific masculine energy was the imprint, which was the beginning of the fall of consciousness, and thus the demise of Coba.

Together, utilizing the codes of sacred union, that are vessels are being continually prepared to embrace, we assimilated potential coding of the rebalance of the masculine and feminine energies working together in union – within the temple energetics – thus adding harmonization particles to the temples energetic field.

One is not better than the other, both have their purpose, their uniqueness, and divine expression, that was created to dance together.

This was a little insight into our Mystical experience of Coba.

What we experience energetically on journeys together.